Every Believer Can Hear God's Voice 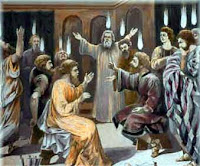 Before the time of Jesus, only certain hand-picked men and women heard God’s voice. The masses of God’s people were afraid of God and of His voice. Jesus changed all that. Jesus said He only did what His father told him to do. He was in constant contact with the Father. After Jesus’ resurrection The Father poured out the Holy Spirit on to all who believed in Jesus.

In Acts 2, Peter explained to the crowd that the outpouring of the Holy Spirit was the fulfillment of prophecy and the dawn of a new era. It began a time when men and women, young and old would hear from God in visions, dreams, and prophecy. It was an era of divine favor on all those who called upon Jesus as Lord and Savior. Every believer could now hear God’s voice. They would no longer have to solely rely upon one man or woman to speak the Father’s Voice. Praise God for His divine favor!
Posted by Harvey Wittmier at 5:00 AM