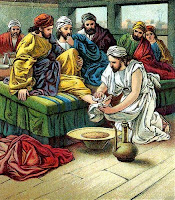 This week I’m talking about last days leadership. We live in a time dominated by an entitlement attitude. One of the fruits of this attitude is people who exalt self and promote self. They function from the core belief that they deserve certain things in life and other people must give it to them. This attitude is completely counter to Jesus who made himself nothing, taking the very nature of a servant, being made in human likeness. And being found in appearance as a man, he humbled himself and became obedient to death-- even death on a cross! Therefore God exalted him to the highest place and gave him the name that is above every name (Phil. 2:6).

The greatest effect leaders can have in this day is to do what Jesus did, humbled himself and let God exalt Him. We can take on Jesus’ attitude and it will defeat the entitlement attitude. Leaders can impart this attitude to those around them.
Posted by Harvey Wittmier at 5:00 AM