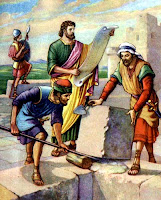 I’ve been encouraging last days leaders to hear from God in the many ways He speaks to us. We’ve touched upon hearing from His written Word, which is the foundation for all that we hear in other ways. We’ve touched on hearing His audible voice and His gentle whisper, as well as dreams, visions, and trances.

But the Father very often speaks to us in "impressions." Impressions are God’s influence on our feelings, physical senses, and our minds. Impressions lack precision and detail, but communicate the Father’s heart without having all the natural knowledge or tools for a situation.

Nehemiah had a God-birthed impression to rebuild the wall around Jerusalem. There were no dreams, visions, trances, or audible voices documented in Scripture (Neh. 1). He was strongly impressed to the point of weeping, and then passionately pursued the rebuilding. The Father was impressing Him to do it! So it is with you and I. We may have a strong impression to do something, say something, or pray something. These are often impressions of God’s voice leading us in His direction for His purposes.
Posted by Harvey Wittmier at 6:07 AM