The Spirit of Baal is Alive Today 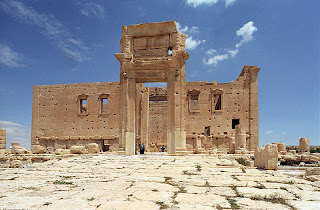 Palmyra, Temple of Baal
The spirit of Baal is alive and active on the earth today. Baal was a false god or demonic spirit worshiped by several people groups during Old Testament times. With this post we begin a series on the Spirit of Baal as the counterfeit to Jesus, the Spirit of Truth. As leaders we must spiritually discern and be aware of those things that influence people and circumstances around us. We must be able to teach and instruct believers in the Body of Christ to resist and overcome spiritual forces that oppose Truth.

The Spirit of Baal operates on the earth today under different names and through different tribes and nations, but it is active!! Let’s look first at the origin and characteristics of this spirit before we jump into what it’s doing today. Baal is a Hebrew word meaning lord, master, possessor or husband. It carried with it the implication of control and possession of people or things. It was often used by the Hebrews in reference to husbands or property-owning men and, early on, even in reference to Jehovah God.

Baal as a false god was worshipped in various forms by groups such as the Phoenicians and Canaanites. The Assyrian’s word for Baal was ‘bel’ meaning the lord or control over men. Bel was worshipped in Babylon. Some theological historians believe ‘bel’ was a pre-Islamic form of Allah. The female counterpart to Baal was Ashtoreth, the goddess of fertility.

Jehovah disassociated himself from ‘baal’ in Hosea 2:16,17 by asking to be called ‘ishi’, bringing to bear a relationship to people rather than control and possession of people. This distinction brings forth our God as one of influence through relationship. Baal is a god of control through possession. In my next post I will examine key attributes of Baal.

Photo: Jerzy Strzelecki. Permission is granted to copy, distribute and/or modify this document under the terms of the GNU Free Documentation License, Version 1.2 or any later version published by the Free Software Foundation; with no Invariant Sections, no Front-Cover Texts, and no Back-Cover Texts. A copy of the license is included in the section entitled "GNU Free Documentation License".
Posted by Harvey Wittmier at 6:16 PM