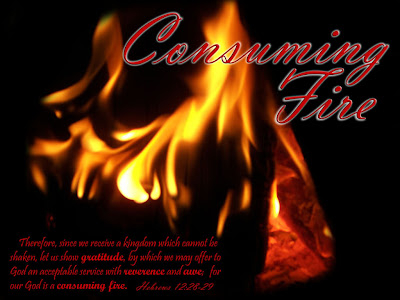 The ‘fire’ of the New Testament is an invisible fire, that becomes visible only through the believer’s submission to it. It becomes visible as we willingly allow grace, yes grace, to burn within you.

Many leaders in business and in the church expect dramatic change from those they lead, while those same leaders are often content with talking about a walk they have yet to take. Now you might ask: ‘do I really know any leaders who have have been greatly refined?’ I would say that nobody in leadership has done this perfectly, but many do it increasingly. These are leaders who are being changed before your eyes. They are leaders who publicly acknowledge their own inadequacies and mistakes, and are transparent in who they have been and who they are becoming. They acknowledge they have not arrived yet as the perfect leader!!!

Refined leadership is about changing into the person God called you to be, not only in your spirit, but outwardly as you are refined by grace, becoming stable in His unshakable kingdom. It is the fire of God that causes the change.

We often only ascribe ‘fire’ to the Old Testament. That kind of fire was a physical fire that consumed offerings, consumed materials, and consumed nations. The ‘fire’ of the New Testament is an invisible fire, that becomes visible only through the believer’s submission to it. It becomes visible as we willingly allow grace, yes grace, to burn within you.

John the Baptist prophesied this in Luke 3:16 saying‘I will baptize you with water. But one more powerful than I will come, the thongs of whose sandals I am not worthy to untie. He will baptize you with the Holy Spirit and with Fire’. The era of grace is the era of the power to change, allowing the consuming fire of God to burn away all impurity leaving only silver, gold and precious gems of a new kingdom in your heart, mind and body. But, to be a refined leader you must submit to the fire before you can walk the talk. More to come!
Posted by Harvey Wittmier at 7:41 PM