Footprints That Follow You Are the Evidence of Trust In You

Footprints that follow you are the evidence of trust in you. As Joshua stood on the edge of the Jordan River looking across to the land of promise he knew there was opposition on the other side. He also knew the people of Israel supported, undergirded and trusted him to go into that land. They verbalized their trust in Joshua 1:16-18 when they said ‘Whatever you have commanded us we will do, and wherever you send us we will go……….we will obey you……be strong and courageous!’ In fact they said that anyone who disobeyed would be put to death. Wow! Thank the Father for grace under the new covenant!!!

Their mindset, heart attitude, and will were firmly engaged in following Joshua across the river. Their words stood in stark contrast to their forefathers who stood at the same place 40 years prior.(see Numbers 13, 14) Joshua knew that, not only was God the Father for him and not against him, but the people were for him and not against him. He could place his feet in new territory knowing that multitudes of footprints would follow his. He earned their trust in the desert. He redeemed that trust at the Jordan River. Their words became actions as they not only crossed the river, but possessed the new territory.

Every leader in business, government and ministry, no matter the size, must know that the opposition is in front of you, not behind you. A leader’s charisma may earn quick, temporary trust, but it’s their character and choices over time that secure stable, enduring trust from people. Some leaders are deceived when they go to cross their river. They discover more opposition behind them than ahead of them. Some people seem to follow but it is out of compliance and trepidation rather than in obedience and trust; a façade of following but their hearts are reluctant. They do not trust!

Your situation may be as simple as a marriage relationship, husband and wife, going a new direction, or as complex as leading a large business or ministry into new places. You need people that support and trust you if you are going to possess the land. Do they trust you? If they do, you’ll see their footprints following you as you cross your Jordan River.
Posted by Harvey Wittmier at 1:17 PM 1 comment: 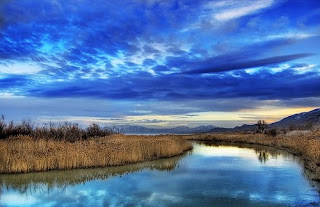 Image: Blue Sunset over the Jordan by Ivan Makarov
Make the first footprints in new territory. When Joshua and the Israelites completed their 40 year wilderness experience, they stood at the edge of the Jordan River looking across to new territory. It was a territory of promise, provision, and purpose; a land fulfilling the promise given to Abraham for the destiny of a nation, a land of provision in abundance to grow and prosper, a land of purpose to establish the Spirit of the one true God as preeminent in faith and worship.
They stood on the edge of a river having spent 40 extra years waiting for another chance at the land of promise. They had seen the river before but backed off due to fear of the opposition, fear of failure, and fear of personal harm. They doubted their God was more than able to overcome all opposition; doubted the promise, doubted that the uncertainty of the new land was worth giving up the certainty of the old land.

In Joshua 3:8 the Lord told Joshua; “tell the priests who carry to Ark of the Covenant: when you reach the edge of the Jordan’s waters, go and stand in the river.” We see in Joshua 4:10 that they stood there until the entire nation crossed over to the other side. The priests who carried the covenant, the very presence of God, went and stood in the river while the army and the people followed them. The Old Testament priests made a way for the people to cross over. They carried the covenant of faith, of promise, of presence, of righteousness, and of truth pushing back the waters separating them from new territory. Only the priests could do that.

Today, each believer in Jesus carries the covenant, a new covenant of grace and peace. 1 Pet. 2:10 says that as believers in Jesus ‘we are all a royal priesthood'. Every believer, irrespective of their role in the workplace, church, or family, has the power of grace and the assurance of peace to stand in their personal Jordan River and clear a way to new territory.

There are also leaders in business, government and ministry with a special pioneering call to step into the river so others can pass through to the other side. They have a destiny to make a way, to push back the waters of opposition, to make the first footprints into new territory. Are you one of those leaders? What is the new territory you are called to enter on behalf of your business, government or ministry? Accept the challenge, carry the covenant, and make those first footprints into the land of promise, provision and purpose so others can follow.
Posted by Harvey Wittmier at 1:59 PM No comments:

A King Must Rule From A Secure Place 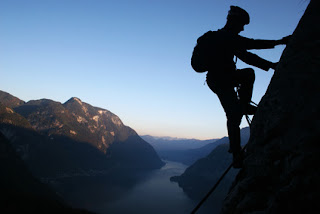 A king must rule from a secure place. Our hearts determine if we rule as stable, secure leaders or unstable, insecure leaders. Palms 73:1 says “Surely God is good to Israel, to those who are pure in heart. But as for me, my feet had almost slipped; I had nearly lost my foothold. For I envied the arrogant when I saw the prosperity of the wicked.” Under the old covenant the Psalmist understood that his relationship with the Father was based in heart purity and outward behavior, i.e. the better you are toward God, the better God is toward you. However, under the new covenant that relationship changed by way of Jesus’ death and resurrection. God is good toward us all the time! Our purity of heart will not affect the Father’s goodness toward us. However, our heart attitude will affect our choices, our judgment, and our leadership and have earthly consequences. We risk losing focus and getting off track in our call, our assignment and our destiny. The Father’s grace is there to keep our relationship with Him intact, but we experience the temporal consequences of getting off track when we slip.

Note that the Psalmist said ‘my feet almost slipped’. He knew his thoughts and emotions were bringing him to envy someone else’s success, specifically success gained through wrong motives and methods. To ‘slip’ means ‘to move from a secure place, to lose traction’. The Psalmist almost lost his spiritual traction because of a heart condition.

What does slippage look like in your world? For the small business owner, it’s the business across the street that expands and succeeds using bait and switch tactics while you
barely hold your own with honest representation of your products. For the experienced employee seeking promotion, it’s the novice in the next cubicle who ‘brown nosed’ the boss and got the promotion. For the man or woman in ministry it’s the minister down the road attracting crowds with flashy lights, charismatic clamor and spiritual junk food, while you barely keep the lights on as you offer spiritual meat and language of life. Don’t move from your secure footing!!! The outward success of someone else must not rule your thoughts or control your emotions. You rule them! When faced with the Psalmist’s dilemma we must first ‘take captive every thought to make it obedient to Christ’ (2 Cor. 10:5). Submit those thoughts to Jesus……and they will submit to Him by departing from you. Do it 20 times if you have to! Secondly, bind up the liar, thief, and destroyer; the demons that seek to influence your thoughts and emotions. They must obey you (Eph. 1:22,23)! Third, check the depths of your soul for the trigger point and weakness that opened you to entertaining and meditating upon someone else’s position in life. Shore up that point in your soul by identifying it and deleting it (James3:13-15).

Some of you may have already gotten off track as I described above. There’s good news! We have a Redemptive Father! Change you mind. Just jump back on track. Restart the engines and move ahead. He’s not mad at you, He’s glad at you for getting past it and moving ahead with your focus on Him, not on them. This is the secure place where you will not slip.
Posted by Harvey Wittmier at 8:27 PM No comments: