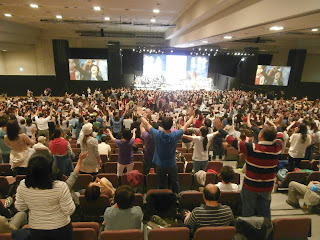 I recently returned from Japan where leaders from 31 nations gathered to encourage, ignite and unite the church in Japan to fulfill its purpose to advance the Kingdom of God. I normally avoid large conferences and gatherings but when invited to this one by our Asia Director for the CrossFire International Alliance I felt a tug in my heart to go and participate. The location was Kobe, which means ‘gate of god’.

This was a powerful and purposeful time in the Spirit. It was not about personal ministry or personal prophecy, but about what God is doing through His Spirit in nations. It was not a typical conference with guest speakers and breakout sessions. But the Holy Spirit spoke and He broke down barriers between nations that have inhibited the fullness of Christ in Asia. Praise and worship paved the way to unity among the 5000 gathered. The ancient gates of Japanese culture were lifted to open to allow a new era of spiritual unity and Kingdom advancement. That unity was a catalyst for forgiveness and a new alignment within the church between China, Korea, and Japan.

The underlying principle in action was the power of humility in leadership.  For example, 3 of the 5 major leaders of the unregistered church in China attended this event. Those three men are leaders for about 70 million of the 100 million believers in China. They came to worship and encourage the leaders of Japan without having any formal speaking time on the agenda.  One of those Chinese leaders traveled out of his country for the first time in his 65 years of life. He had spent most of his life in jail for the gospel. China had never given him a passport until this year, when a miracle paved the way for his first passport to travel. Japan is the first nation to which he has traveled. He prophesied that just as Japan had sent its electronics around the world over the past decades, they would now begin to send the gospel around the world.
This movement is advancing across Asia even as I write this blog. It is of the same streams that flow from our ministry here in the USA. It is of similar Kingdom minded thinking as what Crossfire pursues in this nation.  May the Lord bless this move and may the church in the USA embrace His move.

You can watch video archives of this event at the following link: http://japangathering.org/en/media/2015archives/
Posted by Harvey Wittmier at 2:37 PM

Labels: persecution, The Gathering, The Remnant