Overcoming Persecution With The Warrior Spirit 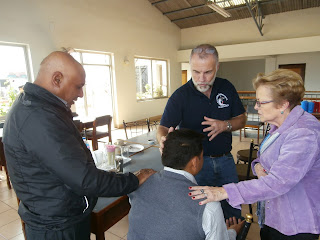 But the Lord is with me like a mighty warrior; so my persecutors will stumble and not prevail. Jeremiah 15:11


The words of the prophet Jeremiah remind me of the people of Nepal. I am now in the mountains of Nepal, a country steeped in spirituality and proud in cultural traditions. Nepal is a cross-section of aboriginal Nepali culture, Tibetan Buddhist influence from the north and Indian Hindu influence from the south. Traditionally a Hindu monarchy that persecuted Christians, it has been a multi-party republic since 2008. While open evangelization is illegal, enforcement is very limited. The Church, about 2-3% of the population, is transitioning from persecuted infancy to maturing adulthood. Two of our key on-the-ground Nepali ministers are teachers of teachers, i.e. they are enlarging the understanding and skills of ministry by teaching adults how to teach the Gospel to children. Another on-the-ground ministry leader is Kali, a 70+ year old apostolic pastor. He is a warrior for the Gospel in the land. He was a lone believer in his home village in Gorkha district decades ago. He learned to fight on behalf of the Kingdom of God at an early age and has prevailed. He has been directly influential in birthing over 400 churches during a time of persecution. He is now ‘father’ to many young pastors and ministry leaders throughout the country. His ministry is in rural areas where few western missionary organizations know of him and his work. But I guarantee the Lord of Hosts knows of his work!!

With this as our backdrop, Deborah and I are ministering to about 35 pastors from across the nation gathered in Pokhara. We are conducting a follow-up to our two week pastor/leader school completed by these same pastors in 2014. These pastor/leaders have been hand-picked as a ‘remnant’ that has the noble heart of priests and kings to advance the gospel in this day and hour. After Pokhara I will move to the Gorkha District with Kali where a young prophet from our local church and I will encourage and teach groups of pastors/leaders in three different villages over about eight days. While I am in Gorkha, Deborah will be in Bardiya, the flat lands of western Nepal, teaching for several days to leaders in that District. She and our Asian Director of the Crossfire International Alliance will build up the leaders in that area. This is new territory for us.

The Gospel of the Kingdom is never stagnant, but always moving and advancing in some way…either overtly through evangelism or covertly through hearts and minds being transformed into maturity of character and leadership.

As I write this I am reminded of the aboriginal peoples of Gorkha who were known far and wide as fierce warriors. They were called the Gurkhas. The men were recruited by the British and Indian armies because they were a warrior class; their DNA and culture endowing them with a warrior mindset. Special Units of Gurkhas are embedded in the Indian, British and Nepali armies today. It is said of them that they greeted hardship with laughter. The former Indian Army Chief of Staff Field Marshal Sam Manekshaw once stated that "If a man says he is not afraid of dying, he is either lying or is a Gurkha." Persecution has not prevailed in Nepal. The Church in Nepal is taking new territory with this perspective. The Lord as a mighty warrior is with them and in them.  Advancing the Kingdom of God requires such an attitude in this day and hour. That is heart of the leaders to whom we have the honor of ministering.

Want some more inspiration on overcoming?  Check out this post from Harvey.
Posted by Harvey Wittmier at 6:03 PM