The Bridge from Soul to Spirit 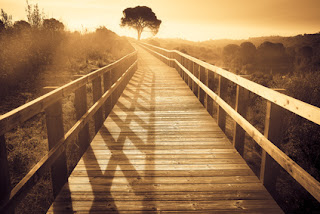 For the word that God speaks is alive and full of power [making it active, operative, energizing, and effective]; it is sharper than any two-edged sword, penetrating to the dividing line of the breath of life (soul) and [the immortal] spirit, and of joints and marrow [of the deepest parts of our nature] exposing and sifting and analyzing and judging, the very thoughts and purposes of the heart. Heb. 4:12 Amplified


The amplified version of Hebrews 4:12 brings forth the unfathomable riches and reality of God’s words spoken to His people. He speaks to the church and to us individually with the power to pierce through our natural thoughts and cultural clutter. The Bible, the inspired written words of God, brings general direction, correction, and encouragement for life. God’s prophetic gifts, words and actions spoken and demonstrated through His people, bring insight and understanding for specific life situations. In this day and hour we need the sharp, penetrating words of His Spirit. His words will analyze and sift our thoughts beyond our natural abilities. It is in this penetration that we distinguish between the un-renewed soul and our regenerated spirit.

The dichotomy between soul and spirit is both a battleground and a bridge. It is the great battleground of decision. It’s also the bridge to the supernatural. Our choice is to allow the life and power of His words to penetrate into the deepest part of our person. We then have a bridge crossing over into the supernatural dimensions of the Kingdom of God.

Today, allow His words to go deeply into places of resistance. Let them dissect and decide your course and your understanding. Let them be the bridge to the supernatural riches of the Kingdom of God in this day and hour.
Posted by Harvey Wittmier at 12:45 PM No comments:

What was...and What Will Be

Ezra 3:12 But many of the older priests and Levites and family heads, who had seen the former temple, wept aloud when they saw the foundation of the temple being laid, while many others shouted for joy.

We live in a day when many in the church are praying and believing for revival in America. We want to see God’s glory manifest…as it once was. We long for that which was. It was the same long ago when King Cyrus released God’s people to return to their homeland.

King Cyrus issued a decree allowing all Jews to return home to restore the temple and rebuild the walls of protection. But only a remnant chose to return. It was only those whose hearts God had moved, those who embraced what God was doing through Cyrus. That small band of people from Judah, Benjamin and the priesthood entered a land of enemies, a temple trampled, and a city without safety. There were great trials and opposition inside and outside the nation. Upon completing the foundation of the temple the people gathered around to see what was emerging. Two sounds came forth from those gathered at the temple…cries of weeping from older people who viewed the foundation as inadequate, less than, and unworthy of God’s glory…..and shouts of joy from a younger generation who celebrated that there would be a temple. While young and old knew of Jeremiah and Isaiah’s prophetic words of restoration, only the young could embrace a new kind of glory.

The glory of God would not be in the gold and silver of the temple, the bricks of the walls, or the gilded gates of the city. It would be in the overcoming power, persistence and purpose of a place where Simeon would declare over a baby Jesus ‘my eyes have seen your salvation’. It would be a place where the Messiah would declare ‘The Spirit of the Lord is on Me’. It would be a city where people would shout ‘Hosanna to the King’, a cross would bear the weight of a savior and sin, a tomb would be opened, resurrection would come forth, and the Holy Spirit would be poured out upon all men. Rather than the glorious Law of Moses it would be the gracious Law of Christ. It would be a place of grace.

Today many of us in the church have seen and experienced glorious times in the church. We had the Jesus movement of the 60’s, the charismatic renewal of the 70’s, the resurgence of faith in the 80’s, etc. We tend to see revival as it was in times past. We envision it based upon what we saw then rather than what the Father sees now. Very often God’s glory for a new season is not the glory of what was. It is a glory for what is.

Be encouraged that God’s glory will manifest, but it may not be like it was. We are entering a new season where the glory of God will manifest in ways not experienced by my generation. Yes, the source is from the Ancient of Days, but the wine is new and fresh. New wine is being released into those with a new wineskin,  a wineskin that is pliable, flexible, and willing to be stretched by kingdom dynamics at work in the church. There will be weeping, and there will be shouting. There will be a sound that comes forth. Will you weep or will you shout for joy?  Will you embrace the new glory of these last days?

Posted by Harvey Wittmier at 9:58 AM No comments:

Labels: embrace the future, end time move of the Spirit, grace, holding on to the past, The Glory of God
Newer Posts Older Posts Home
Subscribe to: Posts (Atom)