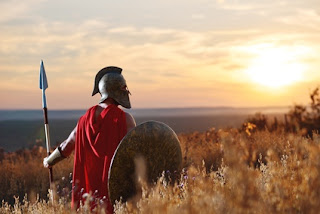 Ephesians 6:17(NIV) "Take the helmet of salvation and the sword of the Spirit, which is the word of God."

In the Body of Christ, the church, I see believers that are potential overcomers, potential prophets, and potential victors against the unseen enemy of their soul.  But many deny the enemy, ignore the battle, or refuse to fight. Some simply believe that ‘the battle is the Lords’. Yes, the battle is the Lord’s, and He established victory through the cross and resurrection. But He delegated authority and warrior status to the church to appropriate the victory He has won. The satanic/demonic realm is very real and active. The victory Jesus accomplished over them is very real and available to you and me. Individuals and churches must not passively submit to the enemy thinking they have no active, assertive role in enforcing what Jesus has done on our behalf.

The reality of our spiritual life is that we live in a combat zone where satanic entities are like street fighters determined to win by any means. Some believers have very restricted rules of engagement; they refuse to fight until life gets so bad they have neither the energy nor the knowledge to fight. They know Ephesians 6:17, Take the helmet of salvation and the sword of the Spirit, which is the word of God. They memorized it. They ‘put on the armor’ every day including the sword safely sheathed in its scabbard, but they seldom draw it. They have theoretical authority, but do not assert authority. They believe that since Jesus won the war they can ignore, deny, or pacify.  In so doing they render the power of the cross to the realm of the dormant, rather than the dominant. The sword of the Word stays in the scabbard, passively sheathed to avoid harming anyone, including the enemy.

That’s the bad news. Now the good news. I see today a warrior class arising within the church; a remnant reminiscent of Gideon’s 300, David’s 400, and the 120 in the upper room. This warrior class not only wears the armor and the sword but engages and defeats the enemy with it. Their rules of engagement are to win. To enforce what Jesus provided. They know the enemy is a street fighter, a jealous jihadist who fights for personal and geographic territory. They know that the Sword of the Spirit must be drawn and become a swift sword in battle. They know there is no Geneva Convention in this conflict. The sword is meant to be thrust into the heart of the enemy through any means necessary. The scriptural references to ‘sword’ indicate offensive use, rather than passive.  In Revelation 19:15 John saw Jesus on a white horse and Coming out of his mouth is a sharp sword with which to strike down the nations.  Warriors know they have peace with their Heavenly Father, but there is no peace treaty with the enemy of their soul. This rising warrior class is the enforcer of divine dominion. They wield the Sword of the Spirit by declaring our victory over the enemy, demonstrating acts and actions forcing him to retreat and flee, and willfully establishing dominion over Kingdom territory AND EXPANDING Kingdom territory!

Posted by Harvey Wittmier at 5:12 PM